Before writing books about UFOs, Noe Torres authored a critically-acclaimed book about one of the earliest successful Latino baseball players of all time, Leonardo “Najo” Alaniz, who was drafted by the Chicago White Sox in 1925. Here is Najo’s story: 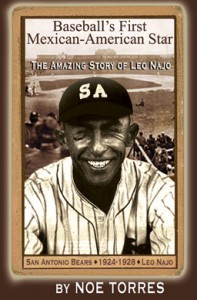 Long before minority players became an accepted part of professional baseball in the U.S., a blazing-fast Mexican-American outfielder named Leo Najo rose to national prominence. Overcoming great personal adversity and the racial prejudice of the day, he transformed himself into one of the greatest players of the early 20th century. When Najo debuted in 1924 with the San Antonio Bears of the Class A Texas League, he electrified standing room only crowds with his incredible speed and astonishing outfield catches. After Najo was drafted by the Chicago White Sox in 1925, The Washington Post called him “one of the greatest baseball players of all time.” His meteoric rise to stardom opened the doors of professional baseball for the many outstanding Hispanic players that have since followed.

To order the first edition of the Leo Najo book, go to http://www.lulu.com/shop/noe-torres/baseballs-first-mexican-american-star-the-amazing-story-of-leo-najo/paperback/product-2712140.html

To order the revised edition of the Leo Najo book, go to https://amzn.to/3iuF7PE

Below is a documentary about Leo Najo produced in 2019 by our friend Oscar Hernandez (oskarhfilms.com):