The Coming of the Airships

THE REAL COWBOYS & ALIENS: THE COMING OF THE AIRSHIPS!!! 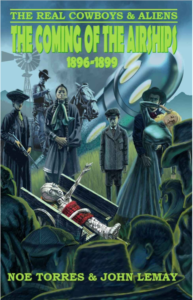 For two years between 1896 and 1897, the skies of North America were invaded by a wave of airships. Some looked like UFOs as we know them today, while many more resembled futuristic dirigibles. Most were piloted by humanoid beings, including a few “Men in Black,” while others were inhabited by bizarre beings that could only be described as not of this earth. In addition to airships, this book also covers otherworldly beings from gilled-spacemen and toga-clad aliens to what might be an early day Chupacabra. Though you have probably already heard of the alleged airship crash in Aurora, Texas, in 1897, did you know that there were many other alleged airship crashes in places like Kalamazoo, Michigan, and Iowa Falls, Iowa? This shocking book is now available in paperback, hardcover, and e-book from Amazon.com. Order your copy today!

After reading this book you’ll ask yourself: Did a Martian crash-land in Lanark, Illinois? Was the dream of a little girl taken aboard a space craft by “little men” just a dream, or the repressed memory of an alien abduction? What was the airship that one witness described as “Noah’s Ark returned to Earth”? Did an Illinois storekeeper really manage to photograph an airship, and if so, where is the photo today? And finally, were the humanoid pilots of the airships inventors from the time period, aliens in disguise, or time travelers from the future just trying to “blend in?”

Be sure to order your copy of our book from Amazon.com. This 226 page book, available in hardcover, paperback, and e-book, is the third in a new series of UFO books by Torres and LeMay, serving as the follow up to The Real Cowboys & Aliens: Old West UFOS, released early in 2020, which covered UFO cases that occurred between 1865 and 1899.