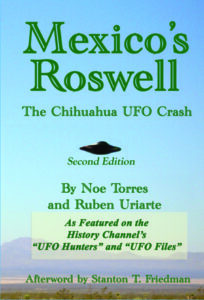 On August 25, 1974, along the Rio Grande River near the Texas border town of Presidio, a thunderous explosion in the sky shattered the stillness of the warm summer night. An unidentified flying disc traveling at 2,000 miles per hour collided with a small airplane heading south from El Paso, Texas. The flaming wreckage of both aircraft fell to the Mexican desert below and immediately became the object of an intense recovery effort by military forces from both Mexico and the United States. This book reveals the shocking story of that night’s historic events, as two governments raced to a remote corner of the Chihuahuan Desert in an effort to recovery evidence of a technology from beyond the Earth. The 2nd edition has been fully revised and updated to include the latest information on this incredible case. Click here to order directly from the publisher or here to order from Amazon. The 2nd edition is also available for the Amazon Kindle.

Authors Noe Torres and Ruben Uriarte appeared in a first season show of the History Channel’s UFO Hunters television series. The show, titled “Crash and Retrieval,” was based on the research that the authors did for their book Mexico’s Roswell: The Chihuahua UFO Crash. The authors served as technical advisors for the program, which first aired on Feb. 20, 2008. For mo 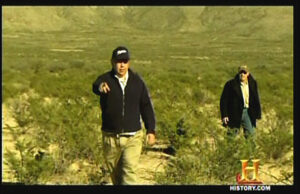 re information about the program, please visit the History Channel Web site. On July 11, 2008, clips from the program were shown on the CNN’s Larry King Live show. In the photo (left), Noe Torres points the way to plane wreckage found in the Chihuahuan Desert. This episode of “UFO Hunters” is considered by fans of the show to have been one of the finest efforts during the three-season run of the program.

Authors Featured on “Coast to Coast” with George Noory

Authors Noe Torres and Ruben Uriarte were guests on George Noory’s Coast to Coast AM broadcast on Tuesday, Aug. 25, 2009, speaking for an hour about the 35th Anniversary of “Mexico’s Roswell.” The authors had previously appeared twice on C2C – Tuesday, May 6, 2008 and August 20,2007. All three programs can be heard at the Coast to Coast AM website (subscription required).

“Noe Torres and Ruben Uriarte are to be commended for taking on this task… I hope that this book will encourage others to come forward.” –Stanton T. Friedman, Nuclear Physicist and Original Roswell UFO Researcher

“Thanks again for a great book based on even greater research!” — Ron Regehr, Retired Aerospace Engineer and Veteran UFO Researcher

“Researchers describe fascinating conspiracy from Chihuahua state. Did a flying saucer really crash in the desert near the Texas-Mexico border? Maybe only the crickets and lizards know for sure, but his little book sure is fun to read and ponder.” — El Paso Times, 30 June 2007.

“I love the book! I read the whole book and I really like all of it, especially the first part where you tell the story of the crash and retrieval. The way you tell the story is very exciting, a great read. The prose really moves along and keeps the reader on the edge of her seat. Great job guys! You put in so much work on the story and it shows. I am glad to have been associated with this work; it is a great satisfaction to me.” — Elaine Douglass, MIT Graduate and Veteran UFO Investigator

“I want to thank you for the gift of your book, my good friends; It seems to be very well written…. I just want you to know that I admire and respect your effort. The book is outstanding!” — Robert O. Dean, U.S. Army Command Sgt. Major (ret.) and veteran UFO researcher.