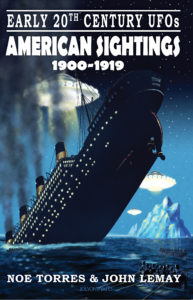 For years, UFO researchers have been puzzled by accounts of strange lights in the night sky reported by survivors of the RMS Titanic tragedy on April 15, 1912. Floating on lifeboats in the frigid waters of the North Atlantic, the eyewitnesses said they saw lights hovering overhead, as if stars had descended from the heavens to view the spectacle of the sinking ship. This may have been one of the first major UFO sightings of the 20th century, according to Noe Torres and John LeMay, authors of the new book Early 20th Century UFOs: American Sightings, 1900-1919, released in April 2021 to commemorate the 109th anniversary of the sinking of the Titanic. The book is available for purchase from Amazon in print form at https://amzn.to/3uB2HLh. It is also available as an e-book at https://amzn.to/2RkoHM9.

This strange story related to the Titanic is one of many UFO tales revealed by Torres and LeMay in their new book. Although the early 20th century is not normally considered to have been a hotbed of UFO activity, the authors say there were actually many notable sightings. According to Torres, “Though the idea of UFOs piloted by extraterrestrials didn’t truly begin to seep into the public consciousness until the late 1940s, people all across America reported seeing strange craft in the early years of the 20th Century.”

Among the unsolved mysteries included in the book is the remarkable story of puzzling radio messages received by American inventor Nikola Tesla, who believed they were coming from other planets. Newspapers throughout the world reported that Tesla was convinced he had intercepted messages from extraterrestrial beings.

One hundred years before the COVID-19 pandemic, our planet was ravaged by another deadly virus, the Spanish Flu outbreak of 1918 and 1919. As Torres and LeMay point out, one of America’s most celebrated scientists of his time, Thomas Edison, believed that the Spanish Flu was possibly “from outer space.” To Edison, the fact that residents of remote islands, having no contact with the outside world, got the flu suggested that the disease may not have originated on Earth.

These are just a few examples of some really bizarre UFO-related phenomena from the first decade of the 20th Century. Torres and LeMay have received critical acclaim for their book series titled The Real Cowboys and Aliens, which covered the time period of 1800 to 1899. This follow-up book is available for purchase from Amazon in print form at https://amzn.to/3uB2HLh. It is also available as an e-book at https://amzn.to/2RkoHM9.