In the mid to late 1800s, America’s farmers, ranchers, and cowboys looked up into the sky and beheld “signs and wonders” that rival any UFO sighting of the modern era, according to the authors of the book The Real Cowboys & Aliens: Old West UFOs, available from Amazon at https://amzn.to/2OBGgCu. The book by UFO researcher Noe Torres and Roswell, New Mexico, historian John LeMay is a follow up to their critically acclaimed 2011 book The Real Cowboys & Aliens, with a greatly expanded number of cases.

According to Torres and LeMay, denizens of the 19th century witnessed huge aerial vessels flying overhead and bizarre humanoids that could only be described as “not of this Earth.” They witnessed UFO crashes, so-called “Men in Black,” technology that seemed from the far future, alien abductions, mile-long airships, underwater UFOs, and much more.

Author Noe Torres said, “In this book, you will discover that truth is stranger than any fiction created by Hollywood screenwriters. You will be shocked to learn of this hidden history of the Old West. We have stories where giant swords fall from the sky, families psychically transport themselves to Mars, aliens emerge from the water rather than the sky, and the ‘Men in Black’ ride around in futuristic vehicles.” 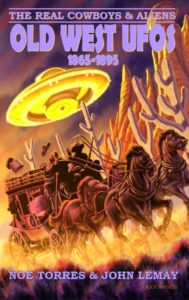 In reviewing this book, UFO researcher Nick Pope says, “If you think the UFO mystery began in 1947 with flying saucers and the Roswell crash, think again. This fascinating, data-rich book explores a wealth of intriguing incidents that were formerly interpreted through the lens of folklore, but which could now lead to a fundamental reappraisal of the greatest mystery of the modern age. With the focus on the Nineteenth Century, this delightful tome shines a light on a slice of American history that shows truth really can be stranger than fiction.”

This 308 page book is the second in a new series of UFO books by Torres and LeMay, serving as the follow up to The Real Cowboys & Aliens: Early American UFOs, released in October 2019, which covered UFO cases that occurred between 1800 and 1864.

The Real Cowboys & Aliens: Old West UFOs, which contains copious photos and illustrations, is available via Amazon, in hardcover, paperback, and e-book formats at the following web page: https://amzn.to/2OBGgCu.