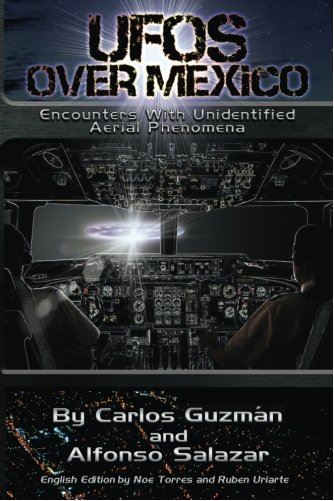 In an amazing audio recording made by Mexico City air traffic controllers, pilot Carlos de los Santos is heard screaming into his headset, “Mayday, Mayday. My plane is surrounded by UFOs and my instruments do not work!” This incredible 1975 case is one of hundreds of pilot encounters with UFOs documented in the new book UFOs Over Mexico: Encounters with Unidentified Aerial Phenomena (206 pages, paperback, ISBN 978-1496137623), published by RoswellBooks.com.

Included in the book are Mexico’s most noteworthy UFO cases, including that of pilot Rafael Pacheco whose Cessna 150 encountered a UFO in 1976 and became caught in some kind of tractor beam, during which witnesses say the pilot received a telepathic message from an extraterrestrial, which was also heard over the aircraft’s radio. The message said, in part “that we [human beings] are an inferior civilization and that we are not alone in the universe … that there are many other civilizations with beings that are physically similar to us, but that are much better developed mentally. He also spoke about us nearing a worldwide catastrophe, as we are the only beings in the universe with such a destructive mindset.”

UFOs Over Mexico: Encounters with Unidentified Aerial Phenomena is a revised, updated English translation of a classic work of UFO research, Ovnis y la Aviación Mexicana, by Carlos Guzman and Alfonso Salazar. The original book was published in Spanish in 2001 and has never previously been available in English. It is considered one of Ufology’s most important works of research.

Authors Guzman and Salazar are two of Mexico’s most experienced and highly-regarded UFO researchers. For decades, they have quietly conducted exhaustive research into their country’s most remarkable UFO cases, especially encounters involving aviation. While they do not receive the media attention of celebrities like Jaime Maussan, Guzman and Salazar are well known throughout the world for their careful and well-documented investigations into Mexican UFO cases throughout history.

This new English edition was prepared by authors Noe Torres of Texas and Ruben Uriarte of California, who have themselves written a number of books about historic UFO cases. “This is not a case of simply translating the original work from 2001,” Torres said, “We essentially re-wrote the book, with cooperation from the authors, to make it more relevant to persons who are not familiar with Mexico’s history, geography, or culture. We condensed the book down a bit to focus on the strongest cases and added some of the cases that Ruben Uriarte and I have worked on ourselves – for example, three reported UFO crashes along the Texas-Mexico border. Also, the original book only covered cases through the year 2000. We went in and added more recent cases. So, in a way, this is an entirely new work.”

World-renowned Ufologist Jacques Vallee said,”This is a serious compilation of many cases of pilot sightings detailing unusual aerial phenomena in the Mexican skies. The study covers 50 years of incidents, many with radar confirmation and quotes from the pilots themselves. The volume is written in a clear, sober style that gives priority to the witnesses, with little editorial commentary from the authors themselves.”

Dr. Richard F. Haines, Chief Scientist for NARCAP (National Aviation Reporting Center on Anomalous Phenomena) said, “The authors have captured something of the excitement that comes from researching pilot and air traffic controller sightings of unusually strange aerial phenomena. And they have collected and analyzed over fifty years of encounters with unidentified aerial phenomena in Mexico’s airspace.”

Authors Guzman and Salazar are two of Mexico’s most experienced and highly-regarded UFO researchers. For decades, they have quietly conducted exhaustive research into their country’s most remarkable UFO cases, especially encounters involving aviation. While they do not receive the media attention of celebrities like Jaime Maussan, Guzman and Salazar are well known throughout the world for their careful and well-documented investigations into Mexican UFO cases throughout history.

Guzman has been involved in UFO research since the late 1970s and served as Mexico’s representative in the legendary Aerial Phenomena Research Organization (APRO). More recently, he has been closely involved in the Mutual UFO Network (MUFON). In addition, he has written several books about Mexican UFO cases and has appeared on numerous radio and television documentaries about his country’s most notable incidents. He also lectures frequently about the topic at events in both Mexico and the U.S.

Alfonso Salazar is an aviation technician that has made a career of looking into UFO cases involving the appearance of strange objects along the flight paths, or in the proximity, of conventional aircraft. He has worked with many notable Mexican UFO researchers, including Pedro Ferriz, Juan Jose Benitez, and the aforementioned Maussan. Salazar has also appeared on many radio and television shows regarding the UFO phenomenon.

UFOs Over Mexico: Encounters with Unidentified Aerial Phenomena retails for $14.95 and is available for purchase at: https://roswellbooks.com/?page_id=893.