Aliens in the Forest 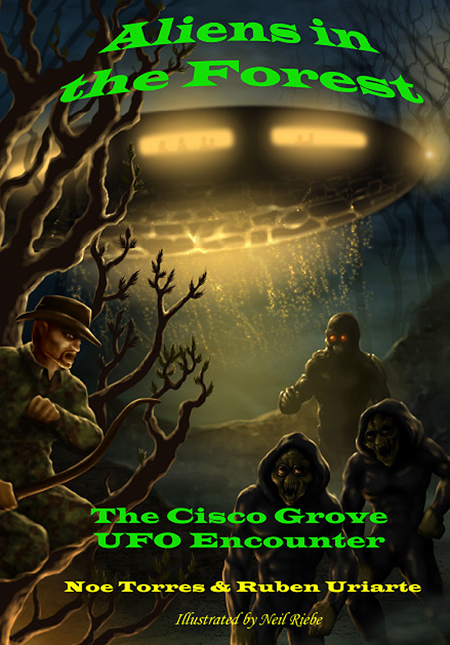 As Featured on Coast to Coast AM & the Jeff Rense Program

For the first time ever, the eyewitness in one of the world’s most intriguing and least known UFO cases speaks out in public about his terrifying encounter with aliens in a dark forest near Cisco Grove, California. In the new book Aliens in the Forest: The Cisco Grove UFO Encounter, researchers Noe Torres and Ruben Uriarte tell the amazing story of a night in 1964 when California hunter Donald Shrum faced his own personal “War of the Worlds.” The book retails for $14.95 and is available here and at most online book sellers, including Amazon.

This stranger-than-fiction event took place in the ruggedly scenic foothills of the Sierra Nevada mountain range in the Tahoe National Forest. Into this remote wilderness stepped the 26-year-old Shrum, who planned to enjoy a relaxing weekend hunting deer with his bow and arrows. As he entered the forest, joking and laughing with his two hunting buddies, little did Shrum suspect that shortly he would be locked in the midst of a terrifying 12-hour struggle with alien forces. Armed only with his wits and one of mankind’s most primitive weapons, Shrum expended every ounce of his strength in an all-night battle against invaders that seemed bent on overtaking him and carrying him away to a fate worse than death.

For the first time ever, Dan Shrum, son of the eyewitness, spoke out in public about his father’s UFO encounter on the Jeff Rense radio program on Friday, July 20, 2012. The program may be heard by clicking the YouTube video link below:

This is first and only fully authorized account ever written about this astonishing UFO incident. This UFO case was called “the most spectacular report we have examined” by Coral Lorenzen of the Aerial Phenomenon Investigation Committee (APRO). Paul Cerny of the Mutual UFO Network (MUFON) said, “There is absolutely no doubt in my mind that this incident is factual and authentic. I have spent considerable time plus many visits with the main witness, and along with the testimony of the other witnesses, I can rule out any possibility of a hoax.”

Click below to listen to the Authors on WIBC Radio:

Listen to the Authors on Open Minds Radio.

Readers of this amazing new book should prepare themselves for an astonishing true story that injects them directly into the middle of a horrifying nightmare come to life and is far more bizarre than any science fiction novel ever could be! Click here to order your copy today! Additional videos about this case are below: